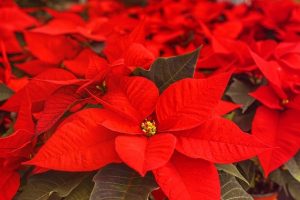 There is a Mexican legend that a poor Mexican girl named Pepita had no gift for the Baby Jesus for her church’s Christmas Eve service. Having nothing else, she picked a small bouquet of weeds and placed them at the bottom of the nativity scene. The weeds burst into bright red flowers, a miracle! The red flowers became known as “Flores de Noche Buena” or “Flowers of the Holy Night.”

We call them “poinsettias.”

Poinsettia plants are native to Central America, especially in an area of southern Mexico. What we think of as the flower is actually a special kind of leaf called a bract. Tiny flowers are located in the center of the bracts.

The Aztecs used the bracts to make purple dye for clothes and cosmetics, and the sap for fever medication.

The first ambassador to Mexico from the U.S., Joel Robert Poinsett, sent some plants back to South Carolina to grow in his greenhouse in 1828. A botanist, he began to grow them and send them to friends and botanical gardens.

The Latin name is “Euphorbia pulcherrima.” They were first sold as cut flowers. In the early 1900’s they began to be sold as potting and landscaping plants.

Before being called poinsettias, they were known as Mexican flame flowers or painted leaf. The shape of the flowers and leaves are a symbol of the star of Bethlehem. The red color represents the blood of Christ, white leaves His purity. In some countries, poinsettias as considered Easter flowers.

Tomie dePaola has written a delightful children’s book The Legend of the Poinsettia. I believe you and your children would enjoy it.

May you have a Christmas filled with hope, joy, and blessings.