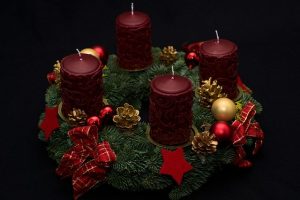 What traditions or activities during Advent add meaning to your celebration of Christ’s birth?

The church in which I grew up did not celebrate the season of Advent. We had the Sunday school Christmas play, the choir cantata, and Sunday school lessons and sermons about Christmas. Not until I became an adult did I hear about the Advent wreath and learn its meaning.

I checked the Internet for information about the background of the Advent wreath, and here’s some information I discovered.

In Medieval times, Advent was a period of fasting and contemplating the Second Coming of Christ. Today, during the four weeks leading up to Christmas, we think of Christ’s first coming as a baby in Bethlehem.

The Advent wreath concept began in the 16th century among the German Lutherans. In 1839, a German pastor who worked among the poor, Johann Hinrich Wichem, created a large wreath using a cart wheel. He added 20 red candles and 4 white candles to help the children in his mission school know when Christmas arrived. Each weekday and on Saturdays a red candle would be lit. One white candle would be lit on each of the four Sundays before Christmas. The custom caught on, and the wreath became smaller with four or five candles. The Advent wreath came the United States in 1939.

The circular shape of the wreath represents God’s infinite love. It’s usually made of evergreens, which represent the hope of eternal life brought by Jesus Christ. The candles represent the light of God coming into the world through the birth of Jesus Christ. Although some churches use blue or red candles, three violet candles and one pink candle are traditional. Hope, love, joy (pink), and peace are represented by the four candles. These are lit on each of the four Sundays in Advent, accompanied by a corresponding Scripture reading. A white candle, the Christ Candle, is often added in the center. This candle is lit on Christmas Eve or Christmas Day.

I love the Advent Wreath tradition because it adds meaning to the celebration of Christ’s birth. It gives us a little more time to remember why God sent His Son. Jesus didn’t remain a baby forever. When He became a man, He became the perfect, once-for-all blood sacrifice for mankind’s sin. The baby in the manger became the man on the cross. Jesus then came alive again and defeated sin, death, and Satan.

It is my hope that your Christmas traditions will lead you to a knowledge and understanding of what Jesus Christ has done for you.